Rules for sub-GHz RF transmitters in the US

After a couple of years of absence from this sort of work, I need microcontrollers to communicate by RF for a couple of projects. I had a box full of cheap 315 and 433 MHz RF modules, as well as some 915 MHz LoRa ones, but decided to spend some time searching for alternatives in the 216 to 960 MHz frequency range. I jotted down some notes and subsequent thoughts that I’ll share in the form of this blog post.

Use of RF transmitters in the US is regulated by the Code of Federal Regulations Volume 47 (Telecommunication), Part 15 (Radio Frequency Devices), Subparts A (General) and C (Intentional Radiators). Transmitters “shall be certificated”, unless they are “home-built devices” as defined by paragraph 15.23. When I buy an RF module I assume, probably naively, that the seller provides me with a device from a manufacturer that has received the necessary certification for it. Do note that if you upgrade the antenna, or make any other modifications, you are responsible for any resulting violations of FCC rules.

For home-built devices, not built from a kit, you don’t need certification as long as you built five or less and they are for personal use only. You still need to make a reasonable effort to ensure they follow FCC rules. But it’d be possible to build some Proof-of-Concept devices that operate away from the usual frequencies, and still be in compliance.

I made a plot of the maximum field strength that is allowed for continuous (per paragraph 15.209) and periodic (15.231e) transmissions. Except for in the 915 MHz ISM band, continuous transmissions are severely limited to a field strength of not more than 200 μV/m, measured 3 m from the antenna. For a typical whip antenna (a monopole without a ground plane) that translates into a radiated power of less than -50 dBm, or 10 nW! That seems impractically low. In the 470-806 MHz UHF band, continuous transmission is not allowed. For intermittent transmissions, FCC will increase your power budget (but limits the bandwidth to 0.25% of the center frequency). Specifically 15.231e allows periodic transmissions of no more than one second duration, separated by a silent period of 10 seconds or 30 times the transmission duration, whichever is longer. The field strength limit is 1.5 mV/m at 216 MHz and ramps up to 5 mV/m at 470 MHz. For a 315 MHz transmitter, periodic operation is then allowed at -30 dBm and at 433 MHz at -25 dBm. When manually operated as a remote control, and for other even more specialized applications, higher transmitter power is allowed. Paragraph 15.205 defines four restricted bands where no unlicensed transmissions are allowed. In the ISM band from 902-928 MHz both continuous and periodic transmissions can have a field strength of 50 mV/m (corresponding to an output power of about 0.5 mW). 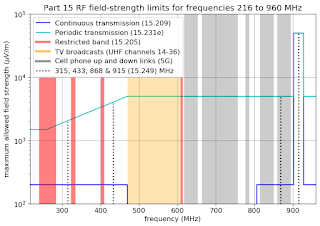 I also plotted the frequency ranges populated by TV broadcasts and 5G, as well as dotted lines to mark the 315, 433, 868 and 915 MHz frequencies for which RF modules are widely available. So why the ubiquity of these frequencies? Well, 915 MHz is easy, since it’s an ISM band and allows much higher transmission power. Similarly, 433 MHz is an ISM band in Europe and Africa but there is nothing particular about it in the US. I’m guessing the day job of 315 MHz transmitters is as remotes for garage-door openers. From my perspective, the 868 MHz ones are the least common ones (I didn’t find a single one in my box of RF modules). I think it’s used for LoRa in Europe so it probably has some special status there. In the US it’s inside the 5G n26 band downlink!

Garage-door openers commonly used frequencies anywhere in the 300 to 400 MHz range until the mid 1990s. I have a couple of retired ones from “Whistler Auto-Mation Products” with adjustable frequencies. 390 MHz then seems to have become the canonical frequency. In 2004 DOD deployed new Land Mobile Radios that operate in the range 380 to 399.9 MHz and garage doors close to military bases promptly stopped working! After this debacle, 315 MHz seems to be the frequency of choice. This is an interesting lesson on the use of unlicensed (“Part 15”) devices, they should be able to handle interference from authorized spectrum users.

No dramatic changes in the last four to five years, as expected. The higher UHF TV channels have all been taken over by 5G. UHF TV used to go up to channel 83 (890 MHz), but now stops at channel 36 (608 MHz). The 868 MHz RF modules seem like a bad idea in the US, since they can interfere with cell phone signals. “Channel 13.5”, the frequency range of 216 to 470 MHz (so nicknamed because it’s between the VHF 13 and UHF 14 TV channels) seems to be the sweet spot for lightweight radio communication over tens of meters. I’ll probably end up comparing 315 and 433 MHz and use the one with least local noise and interference.

Posted by Johan Carlsson at 5:32 PM No comments: