I've been working on a summer project with an intern. One of the tasks has been to characterize various neon glow lamps by measuring the voltage across them as a function of the current through them. I need detailed data and models for certain alternative applications. The only remaining main stream intended use for neon glow lamps is as indicator lights capable of operating on mains voltage (100 to 240 V AC). If the on switch on your power strip glows red, it's probably due to a neon glow lamp inside. Electric coffee makers, waffle irons, et cetera, also have them. But neon glow lamps are slowly, but inevitably, being phased out by LEDs.

A company called CEC Industries still makes what seems like a perfect clone of GEs classical NE-2 neon glow lamp. It's a Taiwanese company that moved production first to Korea and then gradually from there to mainland China. I'm not sure if their neon glow lamps are still made in Korea, or in China. On the usual Chinese web sites I couldn't find any NE-2s, or similar clones. I did find mini neon glow lamps that are shorter, and sometimes smaller diameter, than the NE-2. So maybe the NE-2s are still made in Korea. We tested a couple of the Chinese mini neon lamps and they worked pretty well, but that's the topic of a future post. The NE-2s can be bought from Amazon or a couple of specialized web sites.

The classical GE NE-2 is a 1/8" diameter glass tube with filled with low-pressure Penning mixture (neon with a bit of argon) and two parallel cylindrical electrodes. All the other neon lamps I've seen have that same basic design. Except the Soviet IN-3, which has a square-plate cathode and a wire-frame anode. I recently got some IN-3s. They can be found on Ebay and on a couple of Ukrainian web sites that sell old Soviet electronics. 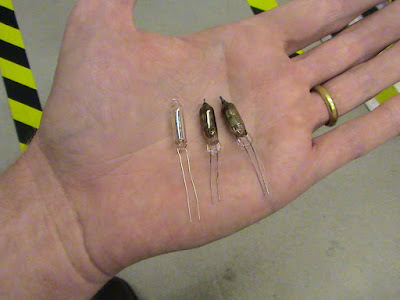 I don't know why the IN-3 glass tubes have the smoky appearance. Here's a close up to better show the internal structure. 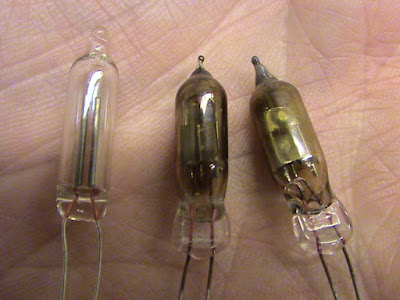 And here they are fully lit up by a DC voltage source! 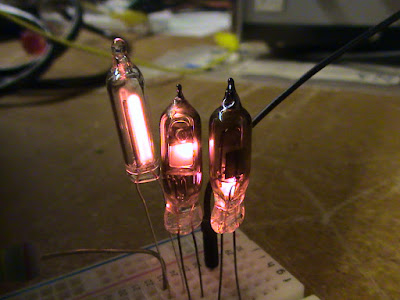 The IN-3 on the right was intentionally inserted with the wrong polarization to show the difference.

Neon glow lamps have an interesting relationship between the voltage across them and the current through them. The plot below compares the measured voltage versus current for two seemingly identical NE-2 lamps (NE-2 #1 and #2, respectively, in the legend). For low currents (up to about 10 microamps), the device is in a state called a dark (or Townsend) discharge. As current is increased, the breakdown voltage is reached and the lamp becomes a glow discharge, with a clearly visible orange glow. The range of current values where voltage is decreasing (negative differential resistance) is called the subnormal glow. The normal glow is characterized by approximately constant voltage and the abnormal regime again sees the voltage increase with current. 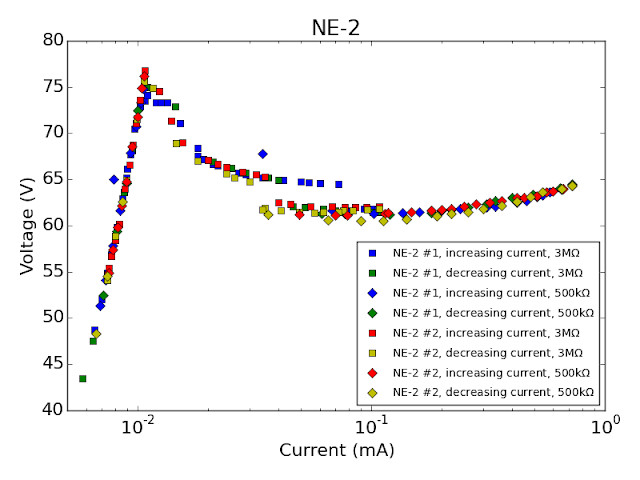 The data displayed is for eight different measurement series, four for each lamp. To resolve the low-current end of the subnormal glow, which is of particular interest to us, a large resistor was put in series with the lamp to limit the current. The voltage across the resistor and neon glow lamp was then gradually increased from zero to 400 V and the current through them measured, as well as the voltage drop over the lamp. The measurements where then repeated with the voltage gradually reduced from 400 V to zero. To reach currents in the abnormal regime, the resistor value was reduced and the procedure repeated.
The V-I (voltage-current) characteristic for the two NE-2s is very similar, with the exception of the hysteresis exhibited by NE-2 #1 where for the central range of current values the voltage was 2-3 V larger with increasing current (the four blue squares in the middle of the plot) than with decreasing. This is probably a thermal effect that should disappear if enough time passed between measurements for the cathode temperature to reach steady state.
Two IN-3s were then similarly characterized, with the result shown in the plot below. 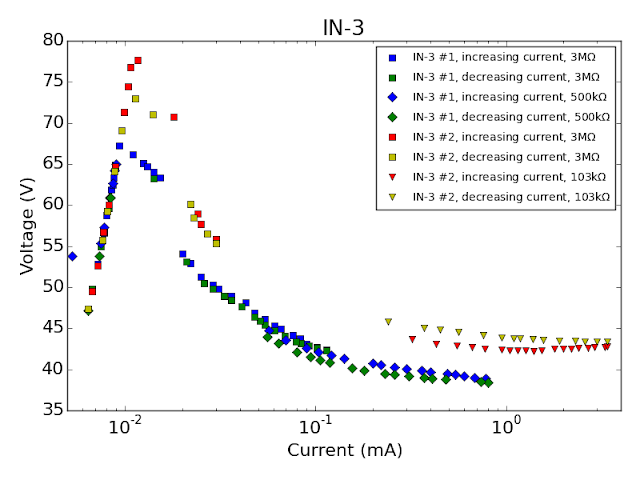 Here the the V-I curves for the two lamps differ significantly! Notably, the subnormal-glow regime extends to very high currents, at least a milliamp. This should make an IN-3 an excellent negative differential resistor for the oscillator we used as our entry for the Flashing Light Prize 2017, but that's a separate post! It's also striking that the IN-3 #1 lamp has an extinction voltage below 40 V.
So characterizing neon glow lamps well enough to develop realistic models for their V-I curves takes a lot of diligence and patience! Or you could automate things by putting together a little circuit controlled by an Arduino sketch. I've opted to do the latter and am waiting for some ICs to arrive. Stay tuned...
Posted by Johan Carlsson at 3:30 AM 1 comment: